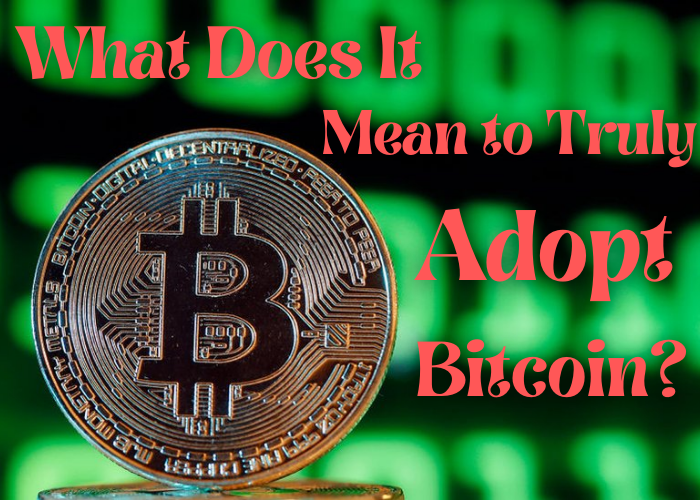 What Does It Mean to Truly Adopt Bitcoin?

Bitcoin is a decentralized digital currency that was created in 2009. It is the first decentralized digital currency. It is not controlled by any government or central bank. It is an open-source software and there is a finite number of Bitcoins that can be mined.
The first thing that comes to mind when one thinks about adopting Bitcoin is what is the benefit of adopting Bitcoin. Bitcoin is a completely digital currency and is not backed by anything  . The concept of Bitcoin is to create a new version of money that has all the properties of money, like being fungible, divisible and scarce. One of the problems with the current money is that it is not readily available. It is also tied with central banks and governments. Bitcoin solves this problem as it is easily transferable and easier to use. It is also a global currency and the transactions can be done anonymously. Another feature that makes Bitcoin a good currency is that there is a finite number of Bitcoins. The number of Bitcoins that can be mined is 21 million. At present, only 16 million Bitcoins have been mined. This makes Bitcoin a good store of value. Bitcoin can be used as a global currency.

Bitcoin adoption is not just about the price of bitcoin but about the world changing. Bitcoin is a technology that has the potential to change the world and the way we live. Bitcoin is a technology that is creating a new world of opportunities and possibilities.  Bitcoin is a digital currency that can be used to buy and sell goods and services, and it is also a store of value. Bitcoin adoption is growing, and this is a very good thing. Bitcoin is a decentralized currency that is not controlled by any central bank. What this means is that it is not subject to inflation  and other monetary policies that are forced onto everyone.  Instead, it is a currency that comes from the people. Bitcoin is based on the idea that money should serve the people and not the other way around. The fact that Bitcoin is not controlled by anyone makes it a very usable and safe way to make transactions. It is capable of avoiding fraud, charge-backs, or interference from governments and other entities. This makes using Bitcoin as a form of payment for things very safe.

Bitcoin is a new way to pay for things and it is growing in popularity. There are many different degrees of adoption for bitcoin. Some people just use it to buy things online, while others have made a living off of bitcoin. It is a new way to make money and a new way to spend it  . There are possibilities for people to invest in bitcoin and make money from it.  Bitcoin has been around since 2009 and it has been a great ride so far. Who knows where the price of bitcoin will go in the future.

What this means for advisors

What Is Fiat Money & Why Is It the Enemy of Crypto?