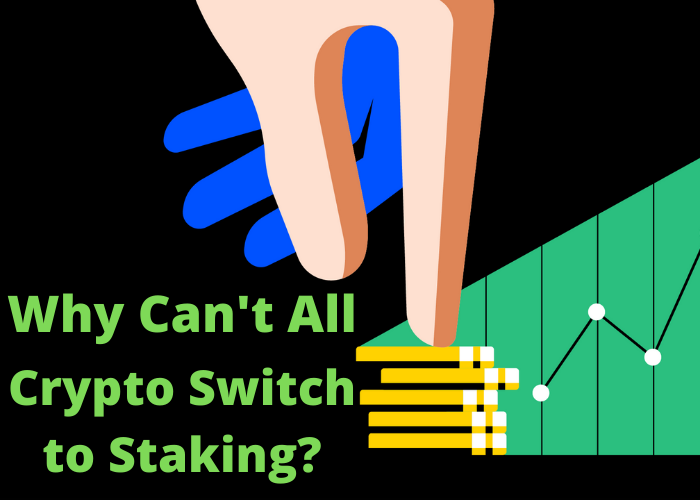 For starters, it’s a lot more complicated than just running a software update. You need to find a way to ensure that the staking process doesn’t end up with the same problem that Bitcoin has, where a few people control a majority of the network. You also need to make sure that the process is fair, so that  if everyone on the network can stake at the same time, there isn’t a problem like that with Proof of Work, where someone who already has a lot of coins can also have a lot of the coins that get created, so they have more coins than they started with.

Bitcoin mining is a process where miners use computers to solve math problems and are rewarded with bitcoins. The more miners there are, the more math problems are solved and the more bitcoins are rewarded. This is great for the miners, but not for the environment. Bitcoin mining requires a lot of energy and a lot of computing power  . The average time for solving a math problem is around 10 minutes. This means that 10 minutes of electricity is used for the average bitcoin transaction. The same transaction would have used just a few cents worth of electricity if it were conducted with cash or credit.  This energy is no longer being used to power homes, it is being used to create new bitcoins.

Proof-of-Stake is a new alternative to Proof-of-Work that has been gaining traction in the crypto space. Proof-of-Work is the algorithm that powers Bitcoin and Ethereum and is a system that rewards miners for solving difficult math problems. This algorithm has been criticized for its use of  large amounts of electricity, and Proof-of-Stake offers a different solution.

The downsides of the Proof-of-Stake algorithm

Bitcoin is based on Proof of Work, which is a “fair” system where people who have more computing power can’t cheat the system. Proof of Stake is based on the idea that the more Bitcoin you have, the more you are rewarded. This is not a fair system because someone who has more money can buy  more Bitcoin, which makes them more likely to get paid. The Proof of Work system is much more fair.

Too much at stake for Proof-of-Stake

Proof-of-Stake is a protocol that allows users to validate transactions in a distributed network without the need for a central authority. This is a much more efficient way of validating transactions and is a much better alternative to Proof-of-Work. However, because it is not as well known, Proof-of -Stake is a technology that is not in wide use at the moment. Our team has developed a unique algorithm for Proof-of-Stake that maximizes its efficiency and makes it far more secure than any other existing algorithm, leading to better overall network stability.

The energy argument is a cost-benefit one

Is NFT the same as Metaverse?